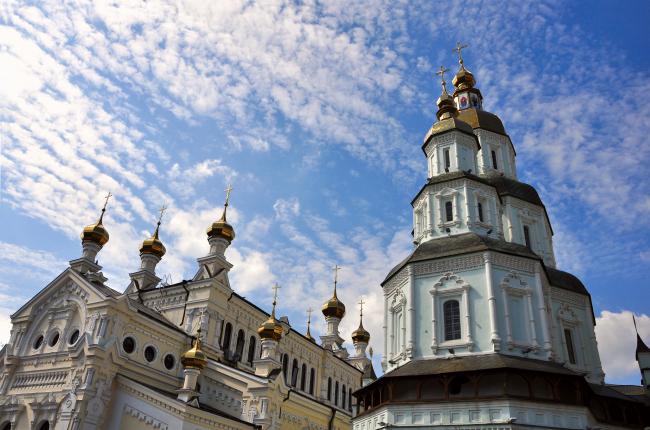 & nbsp; & nbsp; & nbsp; & nbsp; & nbsp; & nbsp; The Stone Parish Church of the Intercession of the Blessed Virgin, consecrated in 1689 by Metropolitan Bryansk Abraham, on the banks of the Lopan, was built by Cossacks from a small settlement near the Kharkov Fortress. According to experts, the temple was built by the same unknown architect, who built the Transfiguration Cathedral in Izyum fortress five years earlier. At the direction of Tsar Peter I, who visited Kharkov in 1709, the fortress expanded to the north, and the Pokrovsky temple appeared on its territory.

In 1726 in Kharkiv, the Holy Protection Monastery founded a college monastery, the first higher educational institution in the left-bank Ukrainian lands. So since 1729 Pokrovsky church became simultaneously monastic (upper temple) and Collegium. The structure with its constructive features was repaired, the interiors were decorated, and in 1732 a massive bell weighing over one and a half tons was installed at the bell tower.

Architecture of the Pokrovsky Cathedral in Kharkiv

After twenty years the department was transferred to the Assumption Cathedral, and the newly painted Pokrovsky turned into the Church of the Baptist Church of the Bishops' House. In the 1870s, they expanded the refectory, rebuilt the staircase on the second floor, and set up choruses. In another quarter century, the Pokrovsky Cathedral finally caught up with the new buildings of the monastic court, which stood up close to the southern facade of the Ozerian Church.

In the early 1920s the Holy Protection Monastery was liquidated, and museum collections and other organizations were located in its buildings. The abandoned Pokrovsky church in the 1960s decided to return the original appearance of the seventeenth century. For which the later disassembly was completed: the refectory between the church and the bell tower, the passage to the Bishops' House and the Ozerian Church. The work slowly lasted until 1992, when the complex of buildings returned the Church. Now carefully restored Pokrovsky Cathedral is the main church of the Holy Virgin Monastery - the historical spiritual and educational center of Sloboda Ukraine in the heart of Kharkiv, which is subordinated to the Kharkiv diocese of the Ukrainian Orthodox Church.

How to get to the Pokrovsky Cathedral in Kharkiv