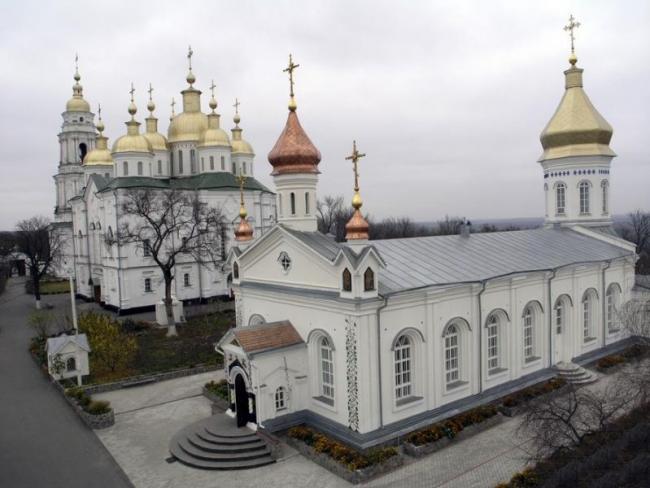 It includes Cross Cathedral, Bell Tower, Trinity Church and other outbuildings. Although they were built at different times, so overall, in harmony with each other, which provide a structure without the other is impossible, they are like a whole puzzle.

For the first time this monument was published in 1650 and then it was wooden. Soon after the attack Tatar army church was burned, and only at the beginning of the century HVIII Cross Cathedral had been built of stone.

Semykupolnym white beauty is a unique masterpiece of Ukrainian Baroque. Notable is the fact that the council has no facade in the traditional sense of it, because all three of its sides are equally designed and implemented, so whatever side you did not see him, you believe that the council will return to you face.

The interior of the Holy Cross Cathedral in any case not inferior to the external splendor. Unfortunately, the iconostasis made the greatest masters V.Reklinskim and S.Shalmatovym were destroyed during the rule of the Bolsheviks, but their current form in no way inferior to the original rich decoration.

This gilded splendor makes you lose the gift of speech and language provides even greater greatness already lush interior of the cathedral.
Captivates everyone who went on a tour of the monastery complex, and tower height of 47 meters, consisting of four tiers.

Belltower complement and multiply the beauty of the entire complex in 1786, there you can see the beauty of Italian style and weave Ukrainian Baroque uniting and cathedral and bell tower.

Once the bell had more than 10 different bells of various shapes and sizes, but the real pride was a bell weighing 6 tons. Can you imagine how magnificent and fascinating rozkochuvavsya ringing around the neighborhood.

Throughout his existence in Poltava Holy Cross Monastery has witnessed a huge number of historical events, also erected a wooden version of the cathedral in honor of Ukrainian troops victory over Polish army, and now the stone cathedral - on the occasion of the victory over the Swedes Peter.

In Soviet times, he even ceased to operate as a church institution and its building was used for more mundane purposes. Many years later, Holy Cross Monastery again turned his status, but he monastery turned into a female.

Only embarked on its territory, as you are immersed in a new world ruled only peace and tranquility and all the problems and bustle of everyday life are abroad.

It offers you a different facet of life, its spiritual side, filled with light and happiness. Your soul, as found a place where she wants to soar. Enjoy these feelings of calm and relaxation in Poltava will be even more beautiful and additions.