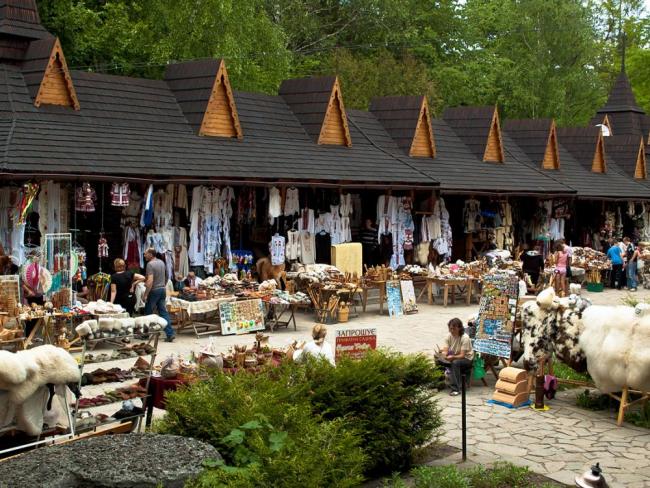 The territorial unit, which was later called Kosiv, was formed for a long time. In 1318, a village with the same name was founded here, now it was part of the Galician-Volyn state. Subsequently, Kosiv passes in turn to Poland and Moldova until it becomes part of the Commonwealth. It is in its composition that it becomes, as one of the centers of salt-growing and actively develops.

It is believed that Kosiv's name comes from the name of the founder of the village - Kos. Although there are other versions. For example, it is known that the word "kis" is an ancient common Slavonic word, which is in many languages ​​and is the name of the bird, spaka.
The town, thanks to its good location, was actively built. On the hill there was built a castle to protect the surrounding territories. In the construction of the city center used popular in that time in the Commonwealth of the Renaissance concept of an ideal city. The whole city is located between market and church areas, and is divided into blocks. Often, even in the interior planning of houses used Renaissance methods.

As in many cities of that time, Kosovo's homes consisted mostly of wooden logs. Unlike a stone and a brick, the tree here was very widespread and cheap, so it was profitable to build it from it. However, unfortunately, because of this almost nothing left from the old architectural ensemble of the city. Almost all died during two major fires in the 20 years of the seventeenth century.
The modern view of the city of Kosiv leaves in itself the features of past architectural styles (old buildings are marked by the influence of secession) and Soviet constructivism. Often the Soviet inscriptions do not fit into the overall landscape of the city, because in those times when they were built, after the Second World War, few were worried about the aesthetic component of the city. Therefore, instead of destroyed neighborhoods, Soviet administrative buildings and apartment buildings were often built.

A separate page of the history of Kosovo is the movement of Hutsuls-rebels known in these regions. First of all, there was a famous legendary leader of the national avengers (or criminals, everyone has his point of view) Olexa Dovbush. In the city he created a monument and a museum named after one of the most romantic characters in the history of the Carpathians, "Hutsul Robin Hood".
Now Kosiv - a small Carpathian town, its salt industry no longer bring income, except from tourists, and the rebels have long left the nearby forests. But people kept memories of those times and preserved that atmosphere of mountain beauty and freedom, which for centuries surrounded this small town as a milky-white morning fog.

You can stay in the city, though it is small, but has long become a tourist center, so there will be no housing problems. It is here that you should start your acquaintance with the Carpathian Mountains, climb the legendary Hoverla, travel to the Chornohora ridge, wander on a wide bows and everything else.

How to reach Kosiv?

Getting to the city of Kosiv can be from Ivano-Frankivsk or other major cities of Ukraine to the station Vyzhnitsa. By car you can reach Kosiv via Kolomyia or Chernivtsi.

Carpathian Tanks - huge cast iron boilers filled with water and warmed up by a fire to the temperature of 40-45 degrees.
The very process of bathing in the vats is similar to the episode of the famous fairy tale, where Ivan had to swim in three boilers, one of them with boiling water.
In the same way, the water does not boil, the temperature is about 40 degrees, which constantly maintains the fire, which is under the vat. Therefore, local people often joke about the fact that their tourists, they "boil".
By the way, so as not to burn during bathing, river rocks are placed on the bottom of the chanel. Near the chamber there is a pool with ice water of the mountain river Rybnitsa, which carries its waters only a few meters from the tank.
One can accommodate up to 8 people, with no sense of tightness or discomfort.
For "Carpathian jacuzzi" only pure fresh water is used, which perfectly promotes general improvement of well-being, removes toxins, improves blood circulation, strengthens the immune system, exerts a therapeutic influence on the skin and joints, regulates blood pressure, improves sleep, improves mood.
Chan stands out in the open air, where you will enjoy the scenery
on the Carpathian Mountains and wide, dense forest.
After contrasting bathing, you can relax on the sun loungers or have a snack in the nearby restaurant.
Also, if you wish to bath in vats, you can add:
The petals of roses, which, in addition to aesthetic pleasure, relieve stress and improve the mood, rejuvenate the skin, making it smooth and silky.
Coniferous branches that will add a natural conifer aroma to the bath, as well as strengthen the body's protective forces, increase immunity, will have a beneficial effect on the condition of the skin and the central nervous system.
Transcarpathian herbs, with which you will feel the sweet aroma of Transcarpathian herbs and immerse yourself in a feeling of comfort and bliss.
All data at Honey Vily