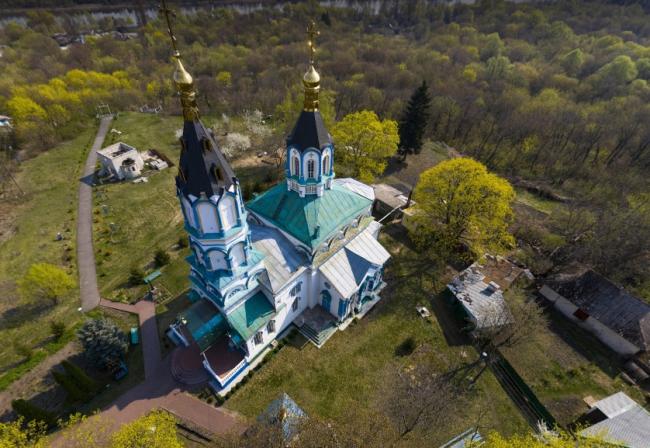 St. Ilyinskaya Church in Chernobyl
In the second half of the XVI century. When these lands were controlled by the Grand Duchy of Lithuania near the Pripyat, near the Chornobyl castle appeared, protected by a deep moat that has been preserved until now. At the beginning of the XVI century. it was a well-fortified and impregnable fortress, thanks to which Chernobyl became the district center. In the 1600s, already during the times of the Commonwealth, a church of the Dominican monastery appeared on the bank of the Pripyat, and the Orthodox community was persecuted for performing religious rites.

The history of the St. Ilyin Church in Chernobyl

The decision to erect in the Chornobyl of the Orthodox Ilyinsky church after the acts of the Radomyshl Consistory was taken back in 1749, during the times of the Commonwealth, and were realized only after thirty years. In 1793, when these lands became part of the Russian Empire, Chernobyl became a freelance town of the Kiev province, in which in the first half of the XIX century. There were three Orthodox churches - Illynskaya, Mykolaiv, Bogoroditskaya. A powerful urban fire in 1849 took away the Mykolayiv and the Virgin temples, and in 1872, the ashes also turned into Illynskaya.

Chernobyl gradually developed and reached its heyday at the turn of the XIX-XX centuries. Navigation, fishing and gardening were the main occupations of the inhabitants of the city, which at that time there were about 17 000 - the maximum number in the history of Chernobyl. For the construction of a new one - the first stone - the Chernobyl Ilyinsky church, they chose the project of the Trinity Church, in the 1860s appeared in Radomyshl, only for the best corrected the bell tower. It is said that the solution was crushed on egg yolks, and the eggs were harvested by the entire community and allegedly due to this, Soviet activists were unable to destroy the temple in the 1930s.

In the Soviet era, the Church of St. Ilyin was turned into a warehouse, and after the explosion at the Chernobyl nuclear power station, the church was empty for 17 years, while the father of Nicholas, who returned to Chernobyl with his family, did not take up the revival of the shrine. During the repair of the temple in 2003, a gypsum bust of Alexander II was excavated under the porch. According to the temple legend, it was this emperor who contributed to the construction of a stone church, at least reigned in those days. The restored bust of the king-liberator is now an ornament of the Illi church, and the level of respect for the autocrat, apparently, explains the inscription: "In 1922, fearing persecution of the godless power, the Chernobyl victims hid their priceless spiritual history in the hope that we will keep it forever."

The illegal residents of the city and temporary workers of the exclusion zone of the Chernobyl Nuclear Power Plant revived the St. Ilyin Church of the Kyiv diocese of the Ukrainian Orthodox Church. Today in Chornobyl, according to unofficial data, there are constantly around hundreds of people, and thousands of workers in the station are in the zone by a shift method. It is from them that a renovated Orthodox community was formed, which hundreds of former Chernobyl residents, who come to visit the graves of relatives and friends left here, necessarily join.

How to get to the St. Ilyin Church in Chernobyl

From sq. Shevchenko, 2 (Polissia bus station in Kyiv) regularly departing a taxi in the direction of the city of Chernobyl (the fare needs to be clarified when landing).